The 10-year struggle to allow pedestrians, transit access on "expressways"

The struggle to allow pedestrians on most Santa Clara County "expressways" has lasted 10 years. It took major efforts lasting years even to use existing paved sidewalks, existing bus stops, and access to the Capitol light rail station and the Lawrence Caltrain station. Only Almaden Expressway and Montague Expressway never had "pedestrians prohibited" signs while being identical to "expressways" that did. The "expressways" are not freeways at all, but arterials having the same speed as many other arterials, usually 45 mph. They have one-fifth as many intersections on average which actually increases safety. In all but a few cases, there are no paralleling roads so pedestrians don't have a choice but to use the "expressway."

In 1990, MTS forced removal of all "pedestrians prohibited" signs on Central Expy in Santa Clara. Most people walking past the signs were in fact transit patrons walking between a bus stop and where they worked -electronic companies located on the "Expressway."

MTS forced removal of all "pedestrians prohibited" signs on Lawrence Expressway in Santa Clara in 1991 and Sunnyvale in 1993. Prior to that, paved sidewalks and pedestrian paths, dating from the time the road was called Lawrence Station Road, were "prohibited" to pedestrians. Bus stops also were "prohibited." Mayor Souza of Santa Clara asked the traffic engineer during the final city council vote to allow bicycles and pedestrian "Do you remember when you opposed people walking to bus stops? [No answer.] Remember that? [Still no answer.]

Caltrain patrons were "prohibited" from walking to a nearby industrial park from the Lawrence train station, as the "expressway" was, in typical fashion, the only north-south road within a half mile (i.e., a one-mile walking detour was the alternative). The highway engineers also "prohibited" pedestrians from using a pedestrian underpass (under Central at Lawrence) because they had plans to destroy the pedestrian underpass when adding more car lanes in the future. They falsely argued there was no room for pedestrians after adding more lanes along the entire Lawrence roadway. I examined their blueprints and saw there was plenty of room, they just did not want to spend any of their budget for keeping pedestrian facilities. They have more money for automobiles if they destroy instead of relocate pedestrian facilities when adding more lanes for cars. The cost of posting "pedestrians prohibited" signs is much cheaper, even if it is illegal.

Pedestrians were also "prohibited" from walking to the light rail station on Capitol Expressway An MTS Board member, Mike Keenly, lived just two blocks from the station. He was "prohibited" from using light rail transit by the highway engineers unless he drove his car to the "park and ride lot." MTS fought the highway engineers for two years to remove the signs, and they were finally removed in 1993. 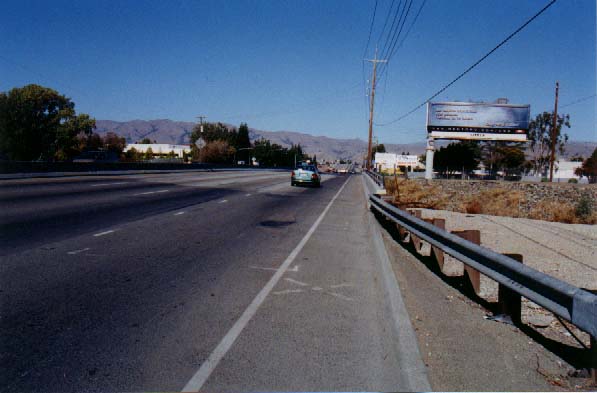 Montague Expressway in San Jose. In 1989, the County highway engineers destroyed the sidewalks on this section of Montague and decreased shoulder width from 8 feet to 4 feet when adding more lanes for automobiles. Photo taken in 1997.

The highway engineers also destroyed bicycle and pedestrian facilities on the Camden Ave./San Tomas bridge over Los Gatos Creek circa 1985. This bridge is frequently used by pedestrians, but they must now walk in the 45 mph traffic lane. Their drawings of Lawrence Expressway showed that they planned destruction of bicycle/pedestrian facilities in their plan to add more lanes for automobiles.

In 1991, at the request of MTS, the County Board of Supervisors adopted a policy which put a stop to all further destruction of pedestrian and bicycle facilities by the County highway engineers on "expressways." As a result of eliminating the signs on Lawrence Expressway, sidewalks were constructed in 1997 when the shoulders were eliminated and replaced with automobile lanes.

The reason for the prohibitions

Why were bicycles and pedestrians prohibited, beginning in 1965? For detailed answers, please see Conflict of Transportation Competitors. For only a summary, read on:

Historically, highway engineers have opposed all transportation that competes with the automobile. They supported the elimination of streetcar systems. Even the Key System electric trains, which went from across the Bay Bridge and throughout the East Bay, were eliminated because the highway engineers and other automobile interests wanted to use the right of way of the trains for more automobile lanes. In 1958, the highway engineers destroyed the trains to add just one lane of car traffic on the Bridge in each direction. The people carrying capacity of the Bridge became one-sixth of what it was with the trains. Highway engineers get paid to move automobiles, not people. In fact, if the number of automobiles should ever decrease, or even stay the same, most highway engineers would be out of a job because there would be no need for more road construction. This results in a bias toward prohibiting pedestrians and bicycles by placing illegal "prohibited" signs and prohibiting electric trains by destroying them.

The author has also led the successful struggle to repeal bicycle prohibitions in San Jose, Santa Clara and Campbell. Others before him led the effort to repeal bicycles prohibitions in Sunnyvale, Mountain View, Los Altos, and Palo Alto. In every city other than Palo Alto, the city traffic engineer opposed bicycles on "expressways." This was despite the facts that there was a bike lane or shoulder on the "expressway" and expressways are much safer for bicyclists because they have one-fifth as many intersections, few driveways and no parked cars. The "expressways" were paid for by a bond measure and property taxes. As such, bicycles and pedestrians paid just as much as motorists.

On the average, it has taken two years fighting the stonewalling of the city traffic engineer before the City Council repealed the prohibitory ordinance which contradicted State law. After winning before the city councils, in most cases it took another fight with the county highway engineers, lasting an average of one year, to get them to comply by removing the signs. The most effective stonewalling tactic of the highway engineer is to agree to do want you ask (including complying with the law), but then never do it until forced to by higher authority. Three times, MTS went to the Director of the Transportation Agency who gave a direct order to remove illegal signs. Last year, it was necessary to get the Supervisors to put pressure on them to remove signs.

There are still some signs "prohibiting" sidewalks on expressways. Pedestrians are often "prohibited" from pedestrian paths and shoulders despite State Law, City Ordinance, and the County Counsel's legal opinion to the contrary. The highway engineers have no respect for the law, if they think they can get away with it.

The latest struggles --and victories-- to allow pedestrians are on our expressway topics page.

Read about the struggle on Capitol "Expressway"

For a history of these prohibitions and destructions of streetcars and electric trains, see Conflict of Transportation Competitors.