Where will the pedestrians walk? 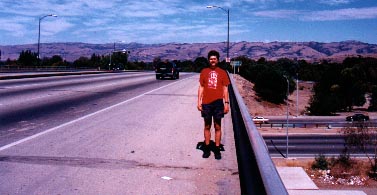 Pedestrians frequently use the Capitol Expressway overpass near the Capitol Flea Market. The alternative to using the shoulder above is to cross the railroad tracks at grade, then cross Monterey Highway at grade, and add a two-mile walking detour [see map] with about 40 minutes added to the trip. Both City and County staff have consistently refused to acknowledge the impact of their prohibitory signs on pedestrians and transit patrons --the fact that those signs actually increase the risk of an accident for the pedestrians making the detour while discouraging many people from walking and using transit. After years of stonewalling on removal of "pedestrians prohibited" signs on the 11-foot shoulders (above) by both San Jose staff and County highway engineers, MTS forced them to remove the signs in 1997. The signs violated both City Ordinance and State Law.

Transit patrons must walk on Montague between bus stops and employment. In 1989, the County highway engineers destroyed the sidewalk that existed above (Montague Expressway in San Jose at Coyote Creek bridge), and decreased shoulder width from 8 feet to 4 feet when adding more lanes for automobiles. At the time, the Modern Transit Society informed County Supervisor Gonzales that the sidewalk was being destroyed and that the destruction needs to be stopped. County highway engineer Dan Collen then replied to Sup. Gonzales' transportation aide Henry Servin* that the sidewalk was not being destroyed, merely moved over because a new sidewalk would be constructed. This false statement was made to counteract opposition to destruction of the sidewalk. MTS would have made quite an effort to stop the destruction, but ended up doing nothing. The sidewalk has, in fact, never been reconstructed. [*Henry Servin can verify the information and he currently works for the City of San Jose Transportation Dept.]

Why pedestrians walk on expressways

County highway engineers severely reduced shoulder width when adding lanes [above, Capitol Expy. near Eastridge Shopping Center]. Sidewalks should have been constructed concurrently. The wide shoulders that previously existed were safe pedestrian facilities. Pedestrians walk along expressways because there is no alternative in most cases [see map], a result of the hierarchical street pattern used since the 1950s.

on MTS letterhead. The letter included the pictures above.

Board of Supervisors, Santa Clara County

This discrepancy would cause a repeat of what has occurred in the past, forcing pedestrians to walk in the lane of traffic:

The VTP 2020 list of projects would cause the following (unless action is taken, below):

We request the Supervisors to stipulate that:

Sidewalks or pedestrian paths must be constructed concurrently with or prior to adding any lane or any grade separation to any expressway, for the entire city block where the lane or grade separation is added, with the only exception being Central Expressway between Potrero Ave. and Fair Oaks Ave. in Sunnyvale [the depressed section which has a paralleling route]. Furthermore, a sidewalk or pedestrian path must be on any side of the expressway where there is a destination [e.g. employment, mobile home park, stores, etc.].

A further request is below.

The original funding for expressways was a bond measure repaid by property taxes, not by motorists using the expressway. Pedestrians paid for the expressways. In 1961, a ballot measure called "Expressway Bond Program" was put before the voters and passed and funded adding lanes and constructing wide (normally 8-foot) shoulders to existing roads. Only San Tomas was mostly a new road, but part of San Tomas was formerly named Camden Avenue.

In the mid 1960s, County highway engineers instituted prohibition of bicycles and pedestrians on many of these roads. While the name was changed from "Avenue" or "Road" to "Expressway," there was no change in the speed limits. Since then, all bicycle prohibitions have been repealed by cities after a 20-year struggle. On three expressways, the signs were actually changed from "bicycles prohibited" to "bike lane" with no other change to the roadway. This means bicycles were prohibited from using the bike lane for 20 years!

The reason for prohibiting bicycles and pedestrians was political. They argued that "expressways are unsafe for bicycles" solely for the political purpose of opposing repeal of prohibitions even from the 8-foot wide shoulders that were standard at the time so they could use the entire right of way for automobiles after future lanes would be added. Typical bike lanes are 5-foot width. In 1988, the County Supervisors rejected a request by the County highway engineers to seek legislation in Sacramento to reimpose bicycle prohibitions on expressways by over-ruling the cities which have jurisdiction.

Similarly, County highway engineers prohibited pedestrians where they could because it is cheaper to post "pedestrians prohibited" signs rather than construct sidewalks when future lanes are added and the shoulder is eliminated. This is a political and not a safety reason. The wide shoulders that existed everywhere prior to lane construction were and are quite suitable for pedestrians. In fact, the Vehicle Code allows pedestrians to walk on shoulders of roads other than freeways and even to walk in bike lanes where there is no adjacent sidewalk.

In August 1991 the County Supervisors, at the request of the Modern Transit Society, put a stop to further destructions of sidewalks and bike lanes on expressways by the County highway engineers when adding more lanes for automobiles. However, opposition by County highway engineers meant this did not go far enough. Wide shoulders are and always have been legitimate pedestrian facilities where there is no sidewalk. County highway engineers currently have carte blanche to destroy shoulders and force pedestrians to walk in the traffic lane. Past experience and their current proposal shows they would continue this action unless the Supervisors prevent it.

Why pedestrians have always walked on "expressways"

Prohibition of pedestrians on expressways has mostly been repealed. On some expressways, it never existed. However, pedestrians walk on expressways even if there are "pedestrians prohibited" signs because there is no alternative route in the majority of cases. This is the result of the hierarchical street patterns that has been the norm since the 1950s. This contrasts with a rectangular grid pattern which does have parallel routes.

Most pedestrians on expressways in industrial areas, like Central Expy. and Montague Expy., are actually transit patrons walking between bus stops and employment.

The County highway engineers falsely assume that pedestrians do not exist unless there is a sidewalk. This is even more astonishing when considering that pedestrians have always been allowed on Montague, Almaden and southern San Tomas expressways.

Highway engineers have a narrow transportation focus: highways. They do not consider the overall transportation picture, and that there may be more efficient and more cost effective use of transportation funds. For example, guideway transit has far greater capacity than automobile lanes, and additional capacity is obtained at little cost by adding trains. Unfortunately, County highway engineers made the list of projects.

The highway engineers' narrow focus has been detrimental to other forms of transportation. They have been in conflict with bicyclists, pedestrians and transit patrons. Details are provided in an illustrated history of Bay Area transportation at
moderntransit.org/ctc/

This was either because of the County highway engineers plans to destroy them, in the case of Lawrence, or simply bias against those who are not motorists in the case of Capitol.

We further request the Supervisors to stipulate that:

Constructing additional lanes and interchanges would not solve the congestion problem, as any reduction in congestion is very temporary. For the 85 freeway corridor, the same congestion returned in merely two years. Constructing lanes and interchanges would actually increase the number of automobiles by the now recognized "induced traffic" phenomenon. In all likelihood, new capacity on Montague would be taken up by those traveling from Alameda County and San Joaquin Valley.

Montague Expressway highway projects by themselves total $193.1 million. Furthermore, the out-of-County commuters would congest other roads in this County upon leaving Montague. It would be much more economical to use this money instead for a superior rail connection to Alameda County and to add more Altamont (ATE) trains, which are now at capacity. This guideway scenario would also minimize pollution and not add to congestion for us County residents when these cars leave the expressway.

There are permanent ways to reduce and even eliminate traffic congestion. Nine low-cost and no-cost ways are listed on our web site at
moderntransit.org/solution.html

See the Highway engineers' list of projects and cover letter (scanned and uploaded).

Details of pedestrian projects (over the phone) from Mr. Lee of County Roads and Airports Dept.:

Note: the project list was made by Masoud, says Mr. Lee. Masoud has been one of the most anti-pedestrian people in the department.