MTS wrote a letter to Caltrans Director Mr. Medina (3/12/99) requesting that trains be again allowed on the Bay Bridge. We obtained a reply from Caltrans (4/5/99). Rebutted portions are quoted below. Here is our response.

Subject: rebuttal to Caltrans' disallowing of trains on the San Francisco-Oakland Bay Bridge and to statements by Mr. Yahata, Caltrans District Director

We received a letter from Mr. Harry Y. Yahata, District Director (4/5/99), stating that he was designated to respond to our letter to you regarding our request to allow trains on the Bay Bridge, preferably by retrofitting the structure.

I can just about say "case closed." His only stated reasons for supporting a new bridge are

(1) "life expectancy" --- which he thinks would be greater on a concrete-based structure but others have stated life expectancy would be much shorter compared to retrofitting the existing steel bridge, and

(2) the Bridge might not "serve as an emergency route" in event of a major earthquake ---which would be solved by using other available bridges and/or BART, as occurred at the '89 earthquake. 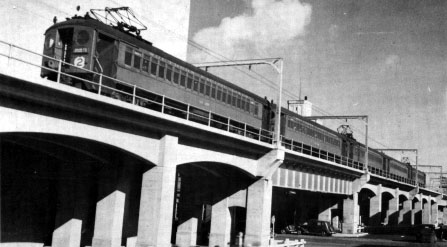 This 5-car train (below) in the Transbay Terminal is the "Dutton Ave. Express" #7 train to San Leandro. Express trains should augment BART since BART has always declined express service. Travel time is the main criteria for travel mode choice. 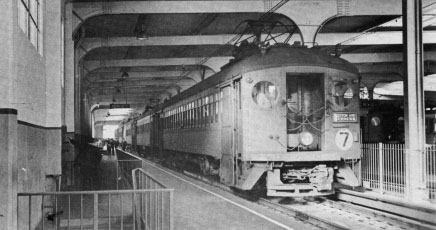 Mr. Yamaha's reason for not allowing trains on the Bay Bridge is that "replicating the original Key System would cost approximately $2.6 to $3 billion." Yet, we never asked that the Key System be rebuilt. The most likely users of the Bay Bridge are High Speed trains connecting San Francisco and Oakland on their way to Los Angeles and Sacramento, and regional trains (e.g., Berkeley to San Mateo direct). Regional trains would use existing tracks once the tracks on the Bay Bridge and the Transbay Terminal are put back. Caltrans removed them in 1958. San Francisco Supervisors have already approved the Caltrain extension into downtown. High Speed Rail would use the same track network while in the Bay Area.

The designers of the proposed concrete bridge advocated by Caltrans, in their presentation to MTC's Bay Bridge Task Force on Feb. 24, 1999, stated that their bridge would not support trains other than light rail. Yet, Mr. Yahata stated that "Caltrans is, however, currently embarking on a design for the new bridge which includes loading capacity for future rail." This contradicts what the designers told Bay Bridge Task Force. Only light rail with routes similar to the Key System could use this proposed concrete bridge, precisely what Mr. Yahata had rejected in his previous paragraph. High speed and regional trains would be unable to use it.

Mr. Yahata's statement that "Rail on the bridge is beyond the scope of this Seismic Safety Project" is simply not true. The existing bridge was designed for dual rail-highway use and if Mr. Yahata would just keep the status quo we would not have an issue. Caltrans is making rail an issue by (1) designing a brand new bridge instead of just retrofitting the existing one, and (2) reducing the weight capacity of this proposed new bridge such that trains would no longer have access to the bridge. This "seismic" project turned into a new design and a prohibition of trains on the bridge.

In closing, it is important to take a world view to see if something isn't way out of line. Looking at world class cities, they have rail lines into the city which are quad tracked as a minimum. In addition, there are rail lines and main stations from several different directions, each quad tracked, minimum. San Francisco today has only a double track in just one direction. This is no way to handle the projected increases in population in the State and in the Bay Area. Transportation was actually better 60 years ago. Since then, government subsidies of the automobile have only given citizens a fraction of the mobility they could have had with a multi modal system. Let's plan for the future by again allowing trains on the Bay Bridge.

For more information, please see our web page on the Bay Bridge. The web page also has links to original documents:
moderntransit.org/sfobb